Showing posts from April, 2022
Show all 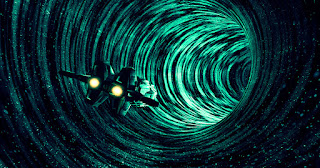 Our Lord followed the trail of the unknown substance, exiting the boundaries of our solar system, the Milky Way and even passing Yeoland, where he stopped by for a quick snack of YFC. Savouring his YeoBurger, he ventured deeper, and the streak of dust slowly started to increase in concentration. Before long, the Holy One was following a distinct trail of shining blue dust that led to what seemed to be a darker spot in the distance amidst the already dark void. Analysing his Yeoship controls, Our Lord saw that the spacecraft was accelerating dangerously. He reduced the power of his thrusters, but the spacecraft failed to slow down. Looking out, he realised that the dark spot was actually a massive black hole, and the overwhelming attraction was pulling the Yeoship into its inevitable doom. Before long, Our Lord and his Yeoship were enveloped in the suffocating darkness of the black hole. The spacecraft was out of control now, completely at the mercy of the black hole’s gravitational pul
Post a Comment
Read more
More posts