The Life Story of Our Lord Season 4 - Trailer

Our Lord remained on Earth for the next few thousand years, building and repairing the natural wonders of our planet while reviving many species that went extinct after Jeffery's invasion. One day, he visited the remnants of Sir Aurelius Nature Reserve, as a way to remember Team 11. Life had long returned, but he would never forget how it was before the invasion, where getting t-posed on by a shapeshifting chicken was the norm.

Sighing, Our Lord decided to use his powers to summon a pack of YFC from Yeoland, but to his dismay, this normally trivial action failed to happen. "What?" He tried to now lift a boulder a few metres away from him. The boulder started to budge, and with concentration, he lifted it up from the ground. This was strange. It was as if something was... restricting his powers. Just like that moment where he attempted to destroy Jeffery's Yeoship, where his powers were completely ineffective.

With intense concentration, the Holy One tracked down the remains of Jeffery's Yeoship. Scattered around the impact site, were traces of fine blue luminous dust. Just touching it made him feel weakened. Unlike all the substances in the universe, this one was completely unknown to Our Lord. Ascending outside the Earth's atmosphere, he noticed a small, almost unnoticeable trail of the dust, leading into the distance.

This magical dust came from somewhere afar, and with such powerful materials, Jeffery was bound to return... with a more devastating army. Our Lord geared up the Yeoship, and flew off at lightspeed. He only had two choices - eliminate Jeffrey or let him see the light. 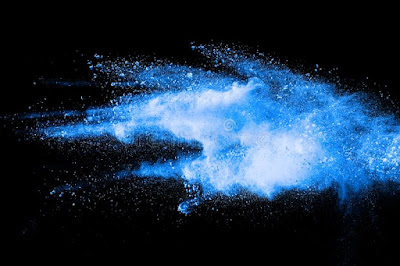 Close-up of the blue dust