July 07, 2020
In the previous part of Our Lord's life story, The LCR was eaten by the dino. Karma, wasn't it? As we all know, The LCR does unboxings of cubes and cubing videos. Hence, in his time as a YouTube creator, he had created a formidable army of cubes.

Noticing his master hadn't been playing with them for the past few days, the GTS3M said, "Where is The LCR, you know, that dude who keeps condemning us?" The Gan 356 X replied with uncertainty, "I heard that a dino has eaten up a few students in SST, maybe he... he... has been eaten by the dino..." Immediately, the two cubes rushed to SST without hesitation, ready to combat the dino.

When they arrived at SST, they noticed a green figure walking around at the nearby Sir Aurelius Nature Reserve. "That must be the dino!" the cubes said in unison. Holding The LCR's vernier calliper, the GTS3M charged forward, using the vernier calliper as a pivot to enter the dino's mouth. The dino's mouth snapped vigorously as it tried to comprehend what the sharp plastic object in its mouth was.

Hearing the cries of The LCR, the GTS3M bounced down the dino's oesophagus to its stomach, where The LCR could be seen flailing for his life. Seeing potential danger of its master being digested, the GTS3M jumped and pushed the LCR down the gastrointestinal tract of the dino, to its anus. The Gan 356X inserted itself to the inner walls of the dino's ass hole and out came the LCR and his GTS3M, albeit a little dirty.

"MISSION SUCCESS!", Our Lord cried. After bowing down to Our Lord, The LCR, with both his cubes and his vernier calliper in his hands, walked to the nearest toilet at SST to wash up.

We once again inform you that any resemblance to any real-life character is purely coincidental and all characters are fiction.(except for our lord) 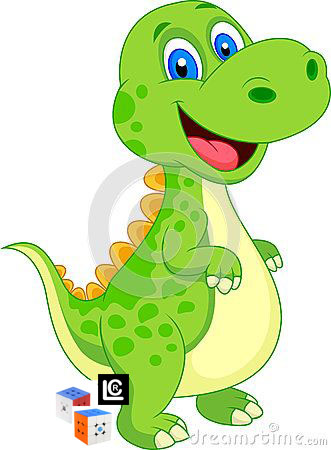