The Life Story of Our Lord Part 5 - Chang Er's Revenge

July 01, 2020
This story takes place after the second battle, as for why Chang Er did not see the first battle, it is because her mooncakes were not selling well and she had no money for glasses even though she desperately needed them.

After seeing her precious dinosaur getting humiliated by our lord, Chang Er rushed down to earth in an attempt to save her precious lizard. But she was too late as when she arrived, the dino laid defeated on the ground as her powers were being sucked into the box our lord made. Also as a result of not having glasses, she thought that her lizard had died and was charging towards our lord. Thinking that our lord was in danger, Axios immediately engaged her in combat, but because Chang Er was the goddess of the moon, Axios lost pretty badly to her and our Lord had to step in.


Seeing that she was a goddess, Our Lord decided to use the sword that he had crafted with the dino's tooth during their last encounter to engage in battle. As a result of his mad sword skills, Chang Er was quickly overwhelmed before our lord went in for the killing blow. However, as he soon as he killed her, Chang Er had all her wounds recovered and her stamina replenished.


Our Lord immediately realised that she had taken the elixir of life and was thus immortal. However, before he could react, Chang Er blasted him away with her wind skills and immediately took Axios' sword and stabbed him through the chest. Seeing his son killed, he immediately went into a state of rage and without a second doubt, used his ultimate skill: divine retribution.


This shockwave was so powerful that even Chang Er's mooncake farm on the moon had been destroyed. The skill killed Chang Er so fast that she could not regenerate fast enough and thus died. However, as an extra precaution, the holy one had destroyed her soul so that she could not be revived.

A new moon goddess was chosen and this goddess for some reason also had a komodo dragon and made mooncakes, although these mooncakes tasted better. As for what happened to Axios, that part will be added in Part 6 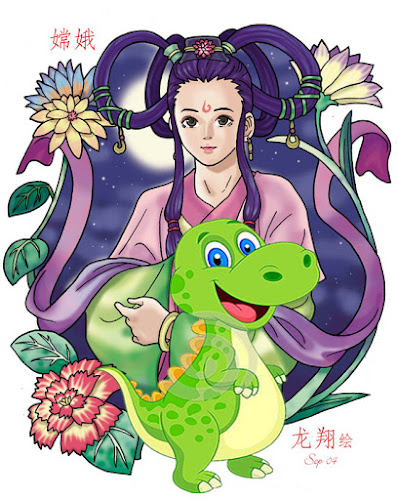